This past weekend, we made a last-minute decision to take a weekend trip to the Covington/Mandeville area to get away for a little while. We've done this previously (four years ago, almost to the day) and that time we got a hotel room, and hit up the Abita Brewery tour, the Abita Brew Pub, and also Pontchartrain Vineyards. However, this trip didn't have much of a plan, but ended up being a beer exploration. Go figure.

We got to our hotel in Covington Friday evening (and got to see former New Orleans Saint Joe Horn in the lobby!) and we were pretty hungry, so we hit up Winos & Tacos. We enjoyed ourselves here. We sat at the bar and laughed at the silly regular making inappropriate comments, but the place is halfway between casual and swanky. The taps were all Abita beers and Negra Modelo, off on its own. The restaurant is owned by a member of the Blossman family (we later found out), so the Abita tap-dominance wasn't surprising. The rest of the bottled beer selection was okay, mostly domestics and Mexican-style lagers, with some Boulder Beer Company Mojo and Sierra Nevada thrown in for variety, I guess. The food was absolutely delicious. The pulled pork tacos were fantastic and the shrimp tacos were also good. They have a great housemade guacamole.

The bartender insisted we try Abita's new Strawator. It was... okay. Don't get me wrong, it was good, but like, a sweeter Strawberry Harvest Lager that they later decided should be a Doppelbock. I don't dislike it, but I won't go out of my way to find it. If I was forced to drink a strawberry beer, it'd be Covington Brewhouse's Strawberry, but, obviously, they didn't have that.

After we ate, we ventured out to The Barley Oak in Mandeville. The location is fantastic -- right along Lake Pontchartrain. It was a clear night, so the moon and stars were reflecting on the dark lake and it was a really great atmosphere outside. Inside the bar was a bit busy, but nothing worse than any other bar. Their tap list boasts about 25 or 30 different beers, all of which were pretty quality. They had all the New Belgium line available here, some Southern Tier, Stone and Rogue, and obviously all of the local fare. We had had all the beers on tap, so we stuck with the bottled list which seemed a bit more impressive. We started with a bomber of Rogue's Double Chocolate Stout, in its giant red bottle glory. It's a good beer, and worth your time, but it's definitely one to share.

After the Rogue, we grabbed Saint Arnold's Bishop's Barrel #3 and holy crap -- this was amazing. It was absolutely delicious. Rich, but not overpowering. You can taste the bourbon from the barrel aging process, but it's not "bourbon first, beer second" like a lot of barrel-aged beers. It's very balanced and just astounding.

We didn't eat at Barley Oak and we were both pretty tired from working and then driving 30 miles across the lake, so we retreated back to the hotel.

We kicked off our one full day across the lake with a stop at the Covington Farmer's Market. There was live music, fruits, honey, coffee, cheeses, and all sorts of things all grown and made locally. We had a good time and I ate a homemade tropical fruit popsicle that was pretty awesome.

After the farmer's market, we went by Covington Brewhouse for their Saturday morning tour. Covington Brewhouse is kind of an underdog in this state when it comes to beer. They started out as Heinerbrau, but after new ownership, they felt it sounded "too German" and they wanted to let people know they were locally brewed. The German name was a legitimate issue in that many stores were stocking their beers in the import sections and not the local beer sections, which can impact sales greatly. Covington contract brews for a couple of local restaurants, including Zea's Rotisserie and Grill and Restaurant Lüke. The tour was very informative. A lot of breweries just go "Hey, look! Fermenters are over there, here's a bunch of free beer! See ya!" which, sure, free beer, but I love the educational aspects of brewery tours, especially since each brewery does things a little bit differently. Our tour guide was Nick, from their sales division. Nick claimed he didn't know a whole lot since he was just a sales guy, but I wouldn't have known that if he hadn't have told us. He said every new employee -- regardless of their role -- spends a couple of days doing a different job in the brewhouse. So, if you're a salesperson, you'll spend a day mashing, or bottling, or packaging bottles into boxes. I love that they get everyone involved in the process. It's a small brewhouse, but they get a lot done. 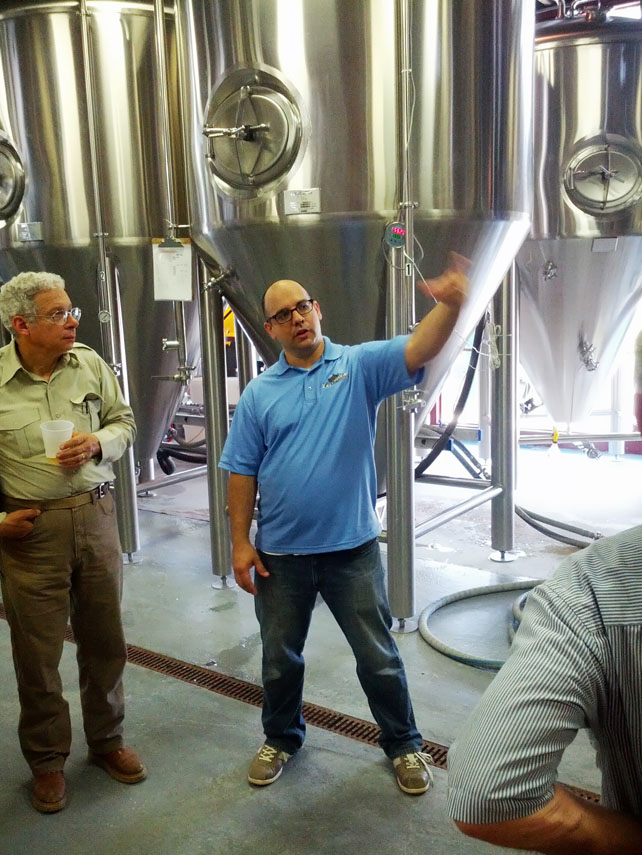 After the rest of the tour people left, we hung back and talked to Nick a little while about the brewery, homebrewing, and especially, their not-yet-to-market IPA. Right now, you can taste their IPA (no official name yet, but internally they call it "Anonymous IPA") when you go for a tour, but Nick said they're aiming for an early August release, with IPA Day coming soon. We managed to acquire some of the IPA to bring home and a full proper review will be posted very soon here, but suffice it to say, it's a fantastic IPA. Not a mouth destroyer, but a great warm-weather IPA. It's probably their strongest (in quality, not necessarily ABV) brew yet.

While talking to Nick at Covington Brewhouse, he mentioned around the corner was a local grocery store that had a fantastic beer and wine selection. We drove to Acquistapace's, and my goodness, was he right! They have almost a whole other store just for liquor. The cold beer coolers were probably about maybe 8 or 10 coolers wide filled with a wide array of beers. Across from the coolers were about 3 rows of "hot" beer. Ranging from domestics to local beers (including things like Parish's Farmhouse IPA) to regional beers (like Saint Arnold's Bishop's Barrell and Lazy Magnolia's Backwoods Belgian) to a wide variety of breweries like Stone and Rogue. If it weren't for the drive, I'd head out there for regular beer runs. I highly recommend making a stop there when you're on the Northshore just to stock up on bottles you can't find on the Southshore normally, or sometimes at all.

For lunch, we headed over to the Columbia Street Taproom. They have about 30 beers on tap and a nice-looking menu. I drank a Lazy Magnolia Backwoods Belgian, and Rhea had a Houblon Chouffee, which was quite nice. I wasn't feeling 100% at this point for whatever reason, so I just had a salad, but it was really good. Spinach leaves, goat cheese, pickled red onions, almonds, and grilled chicken with a fruit vinaigrette dressing. Rhea had a burger with like bacon and some crazy barbeque sauce on it and fried scallions and some nice looking tater tots. 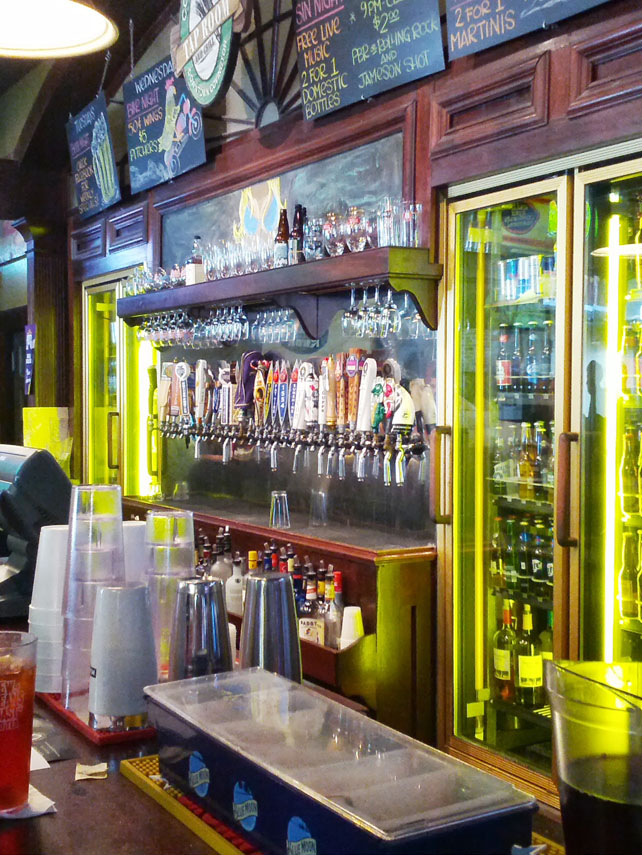 After taking a break at the hotel to watch Sharknado, we hit up one of the newest restaurants in the area that I've been dying to give a try. The owner of The Barley Oak recently opened a brew-pub called Old Rail Brewing Company. They brew six different beers on premises and serve a fantastic menu. I'll have a separate post detailing Old Rail later, but I absolutely urge you to make the drive to the Northshore and eat/drink here. Service was fantastic; everyone was super nice and helpful. The food was absolutely amazing. I had a grilled ribeye steak that was so juicy and delicious. It had a side of cheesey smashed potatoes and some sauteed squash and zucchini. Old Rail does flights of their beers, but the flights come with four beers and they have 6 on tap, so Rhea and I each got a flight and doubled up on two of them. They have Hobo Helles, which was a nice helles lager, even if not my style of beer; Rusted Rail Ale, an amber ale with a fantastic color and even better toasted malt flavor; Golden Spike Wheat, a very refreshing Hefeweizen with noticeable banana notes; Echo Sierra Bravo, their ESB, and while I don't usually care for ESBs, this one is great; Seven Sisters IPA, an American IPA with a really great malt body; and my favorite, Cow Catcher Chocolate Milk Stout, a rich but easy to drink milk stout with a roasted coffee and chocolate flavor.  I really enjoyed everything there. Please, please, please do yourself a favor and get some food and beer from here. It's almost worth moving to Mandeville for. Almost. 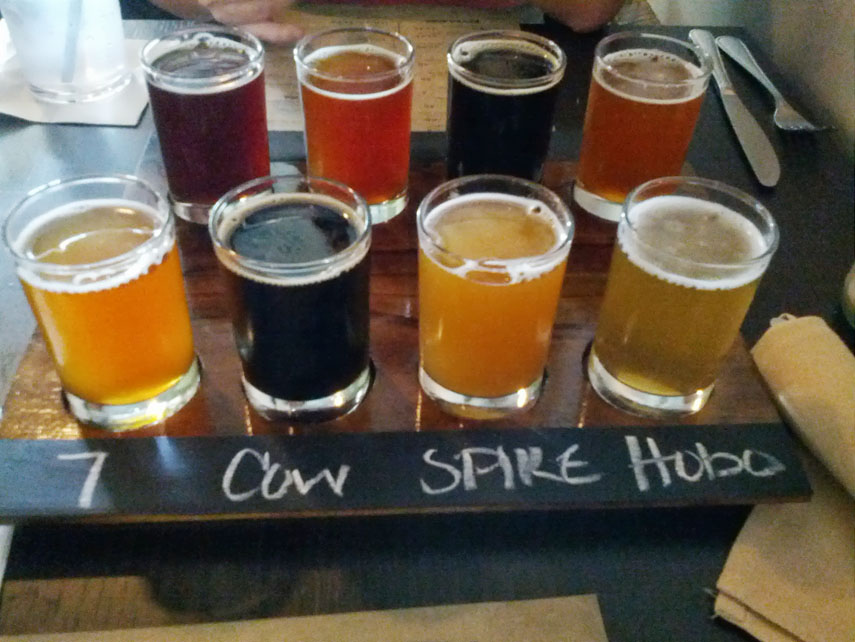 After some down time at the hotel to play Animal Crossing and watch Food Network, we capped off the evening with a trip to The Chimes. They were fairly busy, as to be expected for a Saturday night. The bartenders were friendly enough, though one guy was extra helpful. After letting me know they were out of the Stone Double Bastard with Toasted Oak, he let me know that the Stone RuinTen was just tapped. They have something like 50 beers on tap, with a lot of standards, plus some gems like the Terrapin/Shmaltz collaboration 2012 Reunion Ale. After a while we got a bit hungry so we ordered up half a dozen chargrilled oysters. They were your standard chargrilled oysters with butter, garlic, and parmesan, but they had some spice added on top, like some peppers. They were really very good.  The Chimes was a pretty good spot to sit down and have a wide choice of beers, especially when sitting at the bar, though, the crowd was thick and I was in a sit and relax mood, so I'd probably hit them up around dinner time and not the night going-out-to-party time. 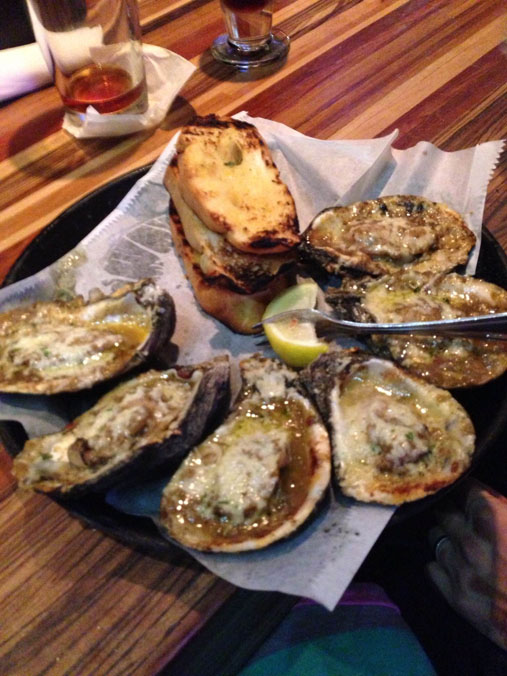 All in all, I was really impressed with the craft beer opportunities on the Northshore, and with Chafunkta Brewing recently opening and Abita expanding, I'm sure things will only get better over there. I'd encourage anyone on the Southshore to do what we did and make a weekend out of it and just explore Covington and Mandeville. There's a lot of fun things to do, especially for the craft beer drinker.